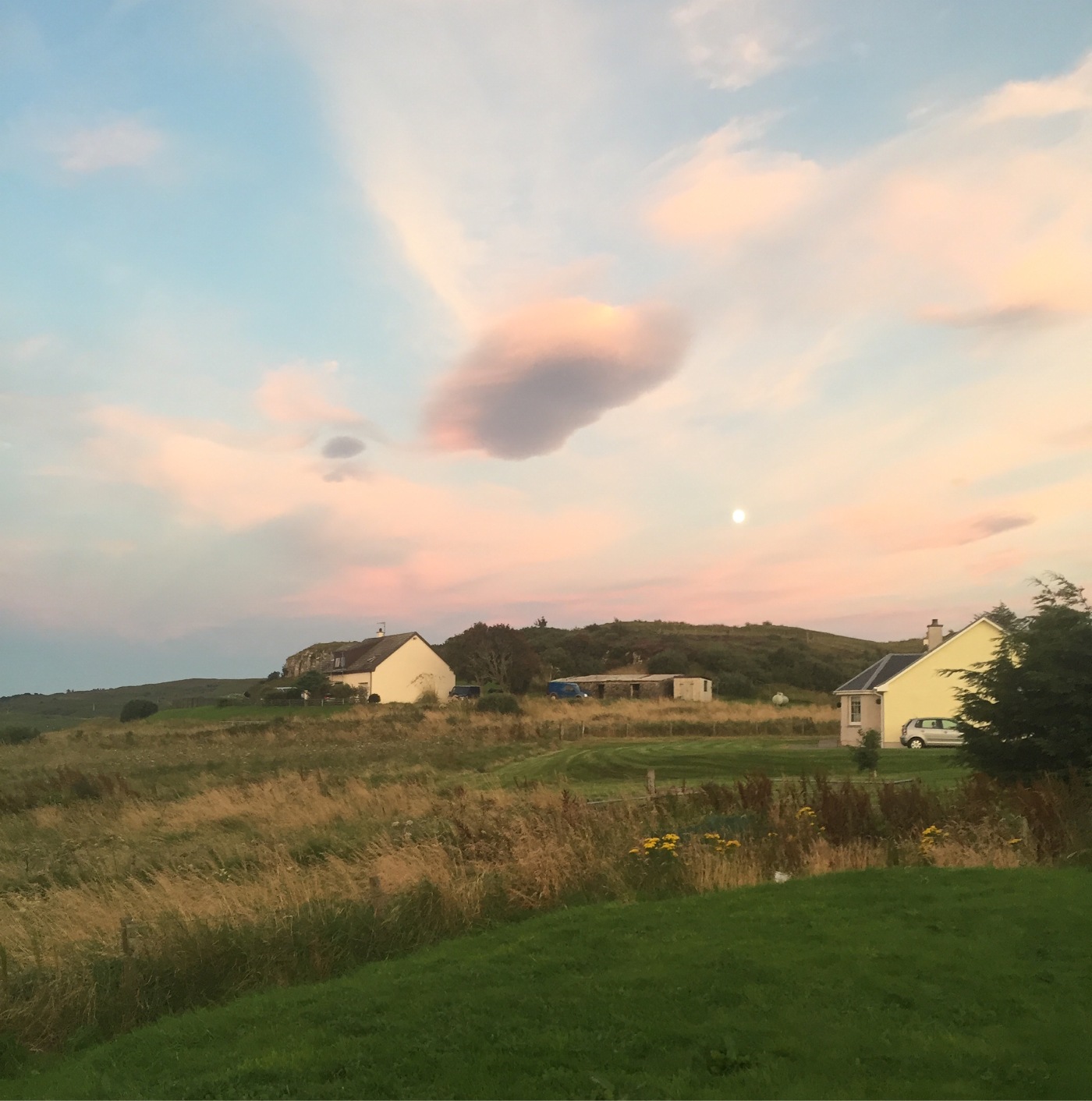 Scotland’s Landscape: Unique and Familiar
As we drove through towns, parks and cities of Scotland, I often asked myself “What does this remind me of? How would I describe this to people?” Well…I think I’ve got something:

The landscape of Scotland combines the best of coastal California, inland New England and coastal Maine. (Remember, I’m talking landscape here, not weather. We’ll get to that another day.)

Like New England in summer, Scotland is green – green trees, green grass, green underbrush, green moss – all attributed to the copious amounts of rain that fall year-round. When driving through some parts of Scotland, particulary the lowlands, I easily forgot I was in another country, and rather felt like I was cruising through the Berkshires, Vermont or New Hampshire. So many familiar looking trees, rolling hils, sheep and cow farms.

No wonder early immigrants named New England and Novia Scotia (translated “New Scotland”) as they did. And I’ve been to Novia Scotia, in particular Cape Breton, and yes, that area does look like Scotland. Perhaps I should have started with that comparison…. But for those of you who have never been to Cape Breton – which I’m assuming is most of you – I will continue.

The California comparison first emerged as we navigated cities such as Stirling, Aberdeen and Inverness – small, narrow roads winding up and down steep hills, all lined with buildings, homes and then, suddenly…a castle…at which time, one quickly remembers that he or she is, in fact, in Scotland.

In Memorial of the Royal Progress in Scotland, by Sir Thomas Dick Lauder, recounting the first visit of Queen Victoria and Prince Albert to the city of Stirling, the streets are described as follows:

“Turning out of the lower end of Broad-street by the narrow Bow-street, the Queen might have expected that the next move of the horses would be up some turnpike-stair [spiral staircase], so little does it resemble a passage for carriages.”

Well, if you’ve been to San Francisco, Los Angeles or San Diego, you know what that’s like. Just add cobble-stone streets, stone buildings, lots and lots of green and the occasional castle and you’ve got a Scottish city.

But in the rural, coastal highlands, like the Isle of Skye and Fort William…that’s where the tri-fold comparison (Maine, New England, California) really comes to life. Imagine hills and mountains as tall as three or four thousand feet, which look all the taller because you are standing at sea-level. Then imagine those mountains covered in low-lying brush, like the desert hills of California, only the Scottish mountains are blanketed in the deep greens of grass, ferns and moss mottled with rich burgandy and purple heather. (And the occassional odd patch of pine trees.) Then, in your minds-eye, place at the base of these mountians and hillsides, sheer cliffs, waterfalls and rocky, sandless coast lines. And there you have it: Scotland.

Or…if you don’t want to give your imagination a workout…just look at our pictures:

Not our house but the view from our house. 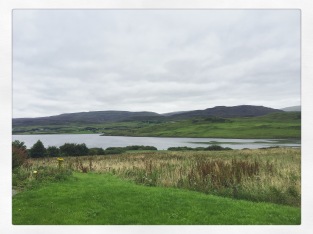 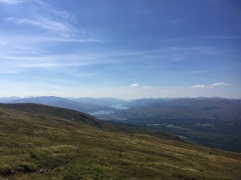 Cairngorm National Park
OK, so on Day 8. We woke to no heat, bundled up as best we could and drove to Cairngorm National Park, where we rode a steam train. The park was pristine, the ride nice and the views beautiful, but we expected the train would bring us up the Cairngorm Mountains not just by the Cairngorm Mountains. Oh well! We still enjoyed the morning, saw the famous national park and the adorable mountain town of Aviemore.

The Urquhart Castle ruins, situated near the mid-point of the northern side of Loch Ness, rests just on the water’s edge. Sunny weather, temps near 70 degrees, a fresh breeze blowing over the lake, made for a great visit to the famous loch and castle. We get it Scotland. We get why you love this place.

Favorites at this castle: 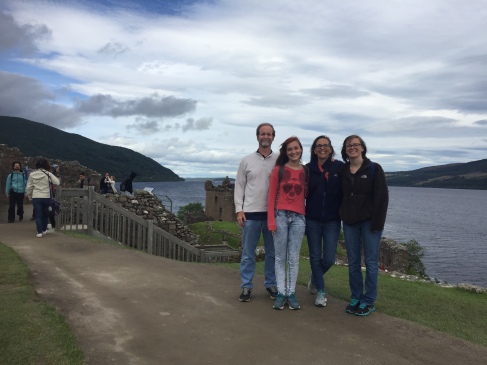 The woman from Alabama’s husband – a highlander demonstrator 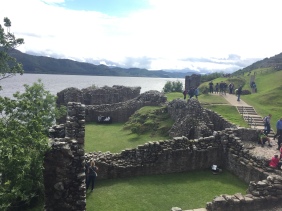 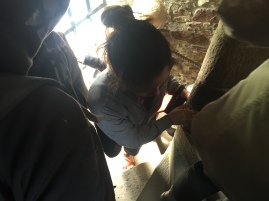 SoCoco and Walking Around Inverness
After Loch Ness, while Doug and his parents traveled to the town of Kiltearn on another genealogy adventure, the girls and I hung out in downtown Inverness. We stopped at SoCoco café and chocolatier for hot cocoa, tomato salad, sweets and wifi. #obviouswin

Most shops closed by 5pm, so after SoCoco, we spent our time appreciating the sights, architecture, stone work, flowers, etc. 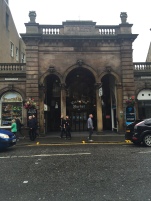 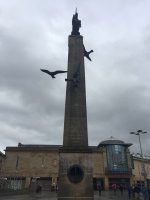 Dinner at Riva and Reports from Kiltearn
At 7pm, we walked to Riva for our dinner reservations, prepared to wait for Doug and his parents to return from Kiltearn. But they were there waiting for us and with more great news. While visiting the church where Jean’s ancestors were married, Doug stumbled on a stone marking the deaths of a whole host of people in Jean’s family line. What a score! And totally worth the two-hour round trip.

We celebrated over tasty Italian food that gave us indigestion.

Oh AND that’s when I posted the Scotland Day 4 blog about Endinburgh. Yes…during dinner…at a pretty nice restaurant…I sat with my laptop literally on my lap (at least I didn’t set it on the table) and uploaded photos one at a time at the speed of say, a teenager cleaning her room on a Saturday afternoon. Just before we paid the bill, I published my post.

When it comes to data, things are rough out there, guys. Even with an international call, text and data plan, connections are spotty. I didn’t mind the break from texting, email and social media but man, oh, man we missed Google and GPS!

Somehow on our drive, Doug found a signal, called the owner and learned how to use the thermostat. Yay! Heat!!!

Up Next
Orkney Isles (I’m tired just thinking about it.)