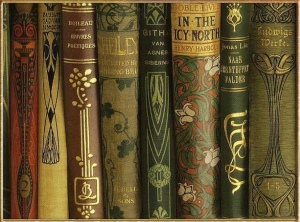 The Night Circus by Erin Morgenstern
You can paint a world with words and invite others to step inside.
Also, writing in the second person is for more than just letters and instruction manuals.

Anything by Dr. Seuss
Sentences can sing, words warble, letters lilt.
Also, it’s ok to make up words. Like fedderzhilt or beggarspilt
Or anything that rhymes
with the previous line.

The Works of Shakespeare
Think you don’t know Shakespeare? Think again.
Also, under some circumstances, it’s totally acceptable for an educated adult to use spark notes.

The Hiding Place by Corrie ten Boom
“There are no ‘if’s’ in God’s world. And no places that are safer than other places. The center of His will is our only safety…”
Also, this is courage. This is sacrifice. This is love.

The Hunger Games Trilogy by Suzanne Collins
In the game of life, nobody gets out alive. Remember who the real enemy is. Love changes everything.
Also, you can always count on Hollywood to mangle a male lead.

The Color of Water by James McBride
A moving, eye-opening, “black man’s tribute to his white [and Jewish and born-again Christian] mother”…how can you NOT learn something from this book?
Also, if my kids could someday say about me what McBride says about his mom: she loved Jesus…

The Little House Collection by Laura Ingalls Wilder
Some dads do stay.
Also, the prairie isn’t flat; you can make molasses candy in the snow; Sunday school is way better nowadays; and kids played with balloons made out of pig intestines. What?! No. Stop.

The Bible
There is not enough room. (At the inn. To share all I’ve learned. In the whole world, to write down all that Jesus said and did.)
Also, it gets real up in here – rape, incest, a woman driving a tent peg through a guy’s temple. Bible don’t mess.

Flowers in the Attic by V.C. Andrews
When you’re 12, a book can be so scary that you literally fear turning the page.
Also, maybe your parents aren’t so bad after all.
Also also, never read this book.

A Tale of Two Cities by Charles Dickens
Sometimes, a beautiful ending leaves you breathless and branded by its searing, golden light.
Also, in contrast to the slow, painful, circuitous, 300-page, Dickensian route it took to get you there, that ending may seem better than it truly is. You will never know for sure.

Twilight by Stephenie Meyer
Even a NYT bestseller can suck. …HA! That pun was not intended. Oh happy accident!
Also, the list goes on…The DaVinci Code…Mind’s Eye…why are people buying these books? And making movies out of them?!

The Help by Kathryn Stockett
Some characters are so real, so loveable, so powerful, you never want to let them go. (And maybe you put off reading those last 50 pages until just before your library loan ends, because that’s how much you don’t want to say goodbye.)
Also, you do not want to know what the “terrible awful” is. You just don’t.

Devil in the White City by Erik Larson
The zipper, automatic dishwasher, shredded wheat and electric people movers all debuted at the 1893 World’s Fair – seriously. It was dubbed the White City because, running out of money and time, the architects decided to whitewash every building. The fair was almost a total flop. Serial killers never get less creepy.
Also, if I could travel through time, I would set the clock for Chicago 1893 and see the White City in person. While keeping a safe distance from anyone resembling H.H. Holmes whose picture I’d keep on me for reference at all times.

1984 by George Orwell
Freedom of speech (thought, belief, religion) is everything in a free society.
Also, we are closer to Orwell’s dystopian society than you might think. A step or two in the wrong direction and we plummet into that darkness.

Anne of Green Gables by L.M. Montgomery
A grand imagination can change your world, so imagine good things.
Also, there’s hope for all of us: the awkward, the clumsy and the unloved; the impulsive, the forgetful and the chatterboxes; the vain, the prideful and the stubborn; even red heads or girls who accidently dye their hair green or unknowingly get their best friend drunk.