I find myself putting off these last few posts. Partly because the vacation glow has almost entirely faded, and I’m fully back to what we know as “the grind”. But mostly, I think, because I feel completely, wholly, entirely, incapable of conveying to you the beauty and wonder of this place known as the Isle of Skye.

On the Way
Having driven the northern route days before, we took the southern route along Loch Ness toward the Isle of Skye. On the way we stumbled upon cafes nestled in the trees, little paths to the loch, waterfalls and this bridge which captivated us all: 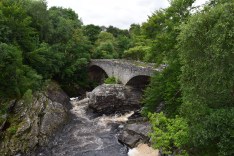 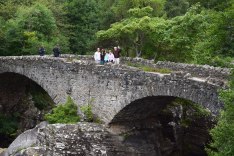 He’s waving away the midges not waving at me.

In one small town, we were waved over to the shoulder by a police officer passing by in his car. When he came alongside the red dragon, he told us we had to wait for an oncoming extra-wide load to pass. “Extra-wide load” may have been an understatement. More like “super-massive-immense-ginormous-extra-wide-and-extremely-long” load. These babies mystified us for a day or two: 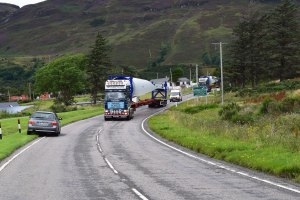 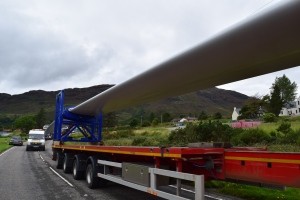 Look at that baby…

The looked like airplane wings without the flap, lights or anything mechanical at all. Then, a couple days later, while discussing alternative energy sources, I shouted, “Hey! I bet that’s what those big white things were! Windmill arms!!!” Because there’s LOTS of windmills on this windy island.

Not gonna lie. I was pretty proud of myself. #winning

Finally in Skye
Just before arriving in Portree, the capital of the Isle of Skye, we stopped at the Aros Visitor Center so Jean could ask some questions about the various sights in Skye. But funny thing…in Scotland, just about any place can call themselves a Visitor Center. Even if they have absolutely no information helpful to visitors at all, except perhaps to point them to the real visitor center, which is where we went after lunch. I had a pretty tasty grilled cheese (or “toastie” in Scot) and if I’d known that would be the best meal I would have for the next three days, I might have savored it a bit more. 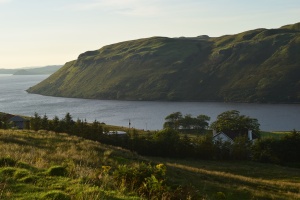 Some views of the Isle of Skye 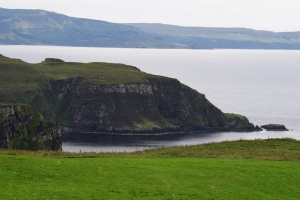 Some views of the Isle of Skye

OK, so we found the real visitor center and used their free wifi to get directions to our rental home. There’s a price for seeing the wild, untouched beauty of remote lands…and apparently in Scotland by sacrifice..in this case the sacrifice of unprocessed foods and cellular data.

So on to our rental house! Here’s what we knew about this house. The house was: 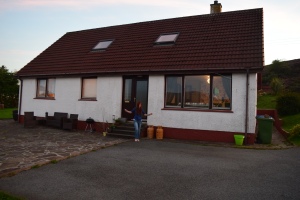 our house in the Isle of Skye

Here’s what we didn’t know about this house in advance: 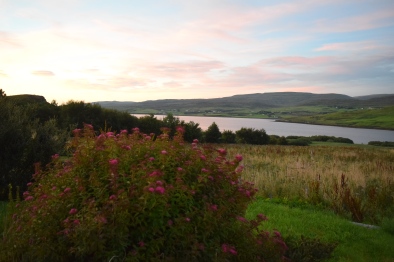 Surprise view from our house in Isle of Skye

For some reason, they didn’t include pictures of this view on their web advertisements. What a nice surprise!

Shortly after unpacking the car, we ventured out for more exploring. Steve opted to stay at home. “Enjoy the time to yourself,” I said as we left. “I will!” he replied with a smile.

Faerie Glen
About 25 minutes from our house, hidden amongst the hills near the town of Uig, lies a enchanting little place known as Faerie Glen. Because no signs for this glen exist anywhere, Doug turned right, onto a road, in the general vicinity of the place marked on our visitor’s map. After passing a cemetery and a few farms, we stopped to ask a couple walking by if they knew where to find the Faerie Glen.

“You’re on the right path,” they said, “Just keep driving and you’ll be there soon.”

About a quarter of a mile later, we came around a turn and entered into a landscape of small rolling hills, carpeted in thick, deep green grass. Here, the rich, moist soil slides beneath the grass, creating ripples of emerald, beryl and jade, so that the earth beneath your feet resembles the waves of the sea. 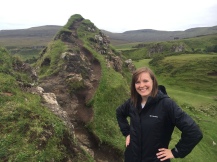 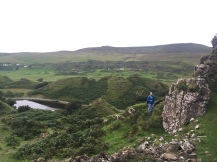 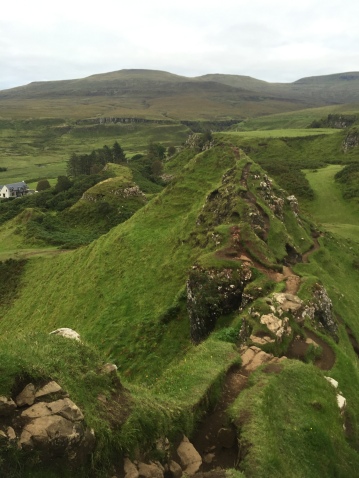 Among the hills, one finds still pools of water, old stone walls, natural towers begging to be climbed, streams and waterfalls. 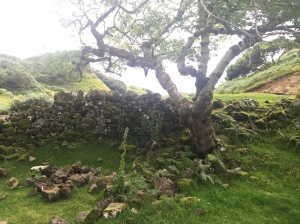 As my mother-in-law said, “You really do feel as though a fairy might pop out from behind a hill or a tree at any moment!” 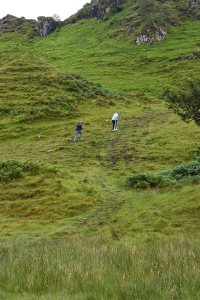 Jean racing up the hill and me trying to catch up to her. 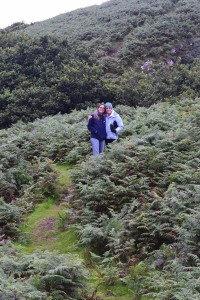 Finally caught up to her!

In the glen, Doug, the girls and I climbed and explored like children. The natural tower required a little creative rock climbing/gymnastics/squeezing/wedging but the view paid off. Seriously, we saw someone of very moderate size nearly get stuck. 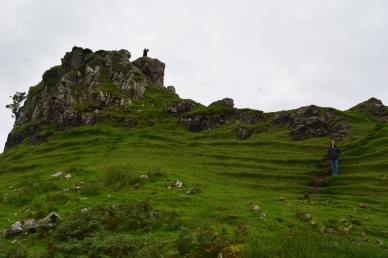 rippling grass and the tower in the distance. 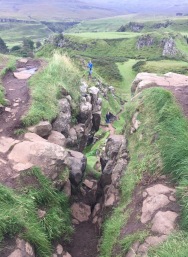 We squeeze through those rocks 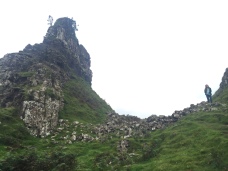 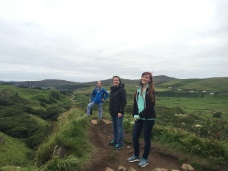 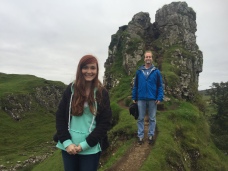 See the entrance to the tower behind Doug. 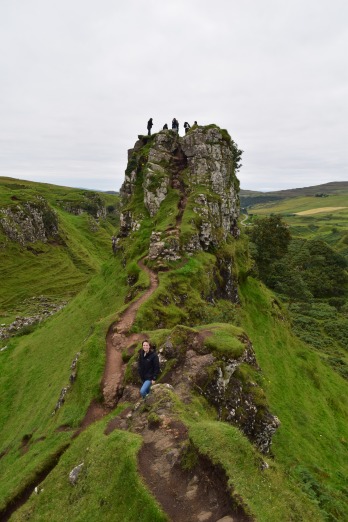 my fave view of the tower 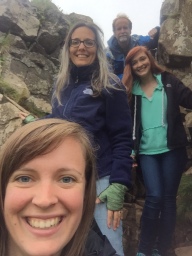 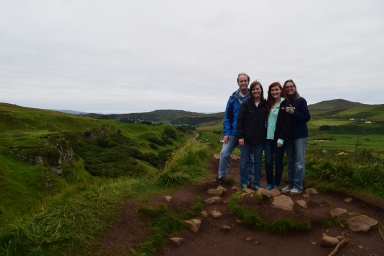 found a lady to take our pic

From the tower, we could hear a running waterfall in the distance and, after climbing down, we searched for the source. Dodging sheep scat and swarms of midges (Nasty little insects with the worst characteristics of both gnats and mosquitos. The secret to avoiding them is this: just keep moving. Walk, run, jump. Just don’t. Stand. Still.) we found the waterfall cascading down a hillside with a tree perfectly positioned at the source of the falls. 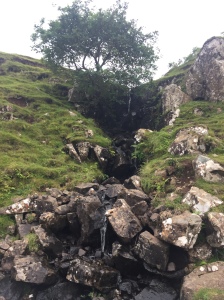 We found the waterfall! 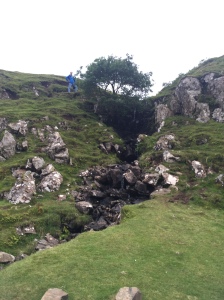 It looks bigger with Doug in the pic!

Adventures in Allergy-Free Eating
As the night grew cooler and the midges more viscious, we headed back to the car and into Portree to grab take out. Ahhh…eating in Skye…what an adventure. With gluten allergies for Jacquelyn and me, and a black and white pepper allergy for Jean, dinner was a bust.

Guys, they put wheat flour, salt and pepper in all their burgers…and they don’t have ANY fresh meat available to make allergy-free burgers. They also preseason all of their beef, lamb and chicken. So off to the grocery store again, which wasn’t much better because most of their foods were preseasoned and highly processed. Yes yes #firstworldproblems

Here’s how you know you’re vacationing with a food allergy: You’re exhausted and hungry…maybe even a little hangry…when you remember that you have gluten-free bread at the house. And you find yourself shouting across the grocery store “Jacquelyn! Grab some butter and we can have bread and butter for dinner!” with all the excitement of a child whose just found a vat of free cotton candy.

one of my very favorite pics

some more views from our house

more views from the house

more views from the house

Lost in Skye
Our ride back to the house was interesting. With no data coverage, Doug relied entirely on his memory. And just as we were nearing the house, Jean said, “Wow, Doug. Did you do that from memory? You did a great job.”

Then we turned onto our street. Only it wasn’t. Because, somehow, we were looking over the inlet of water by our house…from the opposite side. Over the next 15 minutes, as the night sky neared total darkness, we thought we found the house several times. And each time, Jean said, “I still think you’re doing a great job Doug!” Eventually, we banned her from saying anything of that sort until we actually pulled in the driveway. Finally, we got on the right road, but couldn’t find the house. Nothing looked right.

“There’s our house!” Jacquelyn shouted as we drove by for the second time. “I see our food on the kitchen table.” We just laughed at her. What food? We just came from the grocery store!

“No really! I saw our bags of food on the kitchen table. Through the window!” So we turned around again and sure enough, there was our house, light on in the kitchen, and our snack bags from previous trips to the store on the table. Saved by the bright green Co-Op bags!

With a decent wifi signal at that house (hallelujah), I called my parents in the states using WhatsApp. I found a good connection in the laundry room so that’s exactly where I stood for the entire half hour. How good I felt hearing their voices!

And if you read my previous post, you know that this was the night I showered and dried off (if you can call it that) with the damp towels. Dry towels? Just another worthy sacrifice for the wondrous Isle of Skye.

Up Next
Kilt Rock, The Quairaing, Fairy Pools and more…

p.s. Nearly all the photos in this post were taken by Doug.