Because of Edinburgh’s annual Fringe festival and the crowds that come with it, we opted for a taxi ride into the city. Our driver brought us up the narrow, cobblestone streets of the Royal Mile, right to the castle gate. For only £25…just like royalty.

Edinburgh Castle
Guys, I hardly know where to begin. Passing through the gates of Edinburgh Castle felt like traveling back in time, or like being in a Disney castle…only Edinburgh Castle is real. And real people walked those halls, century after century. And for a few short hours, we walked in their footsteps.

I’ll get the bad stuff over with: the worst part was the crowds. So so so many people in tight hallways and poorly organized lines, which felt worse than the crowds at Disney World on New Year’s Eve. Also, the tattoo stadium seating covers a significant portion of  the castle esplanade so that we couldn’t see the entrance as it stands the other 11 months of the year. But we had so much to do and see that neither the crowds nor the obstructed view of the esplanade could squelch our excitement.

I could talk about this all day, so I will leave you with my favorite experiences instead:

The Royal Mile
A mile-long cobblestone street connecting the low-lying Holyrood Palace to the towering castle of Edinburgh, the Royal Mile is lined with shops, restaurants, museums and, in August, street performers, artists, revelers, tourists…pretty much everyone.

Near the top of the Royal Mile

Before strolling too far down the mile, the girls and I split off down George IV Bridge. to find the Greyfriars Bobby memorial which honors the loyal, diminutive Skye Terrier who slept by his master’s grave for 14 years after his master passed away.

We also saw The Elephant House (the birthplace of Harry Potter) and a library with the best inscription ever: 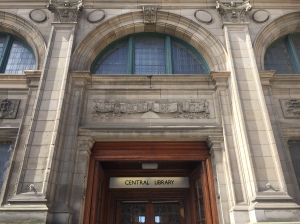 We shopped for about two hours on the Royal Mile and only traveled halfway down the hill before breaking for lunch. Here’s where it gets interesting. Because of the newly falling rain and everyone’s tired feet, we settled on taking a taxi to our restaurant. But we only found a four-seat cab, so Doug and his dad decided to walk while the ladies all rode in the taxi.

“Split up in a foreign country where you have no phone service,” he says. “It’ll be fine,” he says. To keep a long story short, the taxi driver basically brought us to the wrong location and we couldn’t find each other for over 30 minutes. Just long enough for a wailing ambulance to prompt Jean to say, “I hope that’s not for Doug and Steve.” Just long enough to make Doug wonder if he put all his favorite ladies in the back seat of psychopath. Thankfully, we stayed put and Doug eventually came looking for us. I guess that’s how we used to do things without cell phones!

Princess Gardens
After lunch, we stepped outside to find clear skies and a city bathed in sunlight. Far below Edinburgh Castle, lies the Princess Gardens, a park sunken several stories below and between the castle and Princess Street. We entered the gardens from a staircase on Princess Street, which leads to a paved terrace overlooking the park. On the Princess Street side of the terrace, flowers, benches and statues line the 25 foot wide walkway and on the castle side of the terrace, immaculate green lawns and paved paths descend into the lowest parts of the park. Tall, leafy, green trees provide shade in some spots, while the sun shines freely in other areas. And over it all looms the ancient castle. I’m not sure you can beat the view of Edinburgh Castle from Princess Gardens. 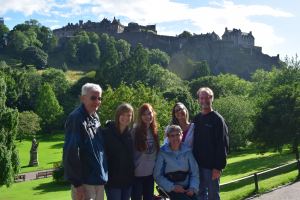 From the Princess Gardens Terrace PC: Some nice lady with Doug’s camera

At the end of the park, we found a small carousel, but after realizing one ride cost nearly five american dollars per person, we chose ice cream instead! Guys, in Scotland, they serve ice cream with a  “flake”. “What’s a flake?” you ask. Don’t worry…I had to ask, too. Well, a flake is this piece of chocolaty goodness you see right here:

Guys, why don’t we have flakes in America?!?! Until we do, I will never again believe we’re better than the rest of the world. America needs flakes! Not the political kind, we already have enough of those. The chocolate ones. To go with our ice cream. Somebody get on this already, ok? American needs you. America will thank you.

Princess Street
So after ice cream we made a quick trip to the Carphone Warehouse…because by now it had become pretty obvious that we needed more than one working phone. For safety reasons. That and Google, of course.

I know that some of you are already shaking your heads. You’re all “Can’t you go two weeks without your phone? Do you really need to be on the internet all the time? You need to unplug!”

Come ON guys! The internet is a beautiful thing. Are there any gluten-free restaurants in town? Google it. What’s the temperature going to be tomorrow? Check the weather app. Where’s the closest gas station? Google it. How do we get to our next hotel? Maps. What does “nemo me impune lacessit” mean? Google it.

Life with the internet is better. Period.

Three days of walking around a foreign country with Doug’s limited international work plan and spotty wifi being our only access to the internet and…..SOMEBODY GET ME SOME DATA!!!!!!!

So we did. In the form of international sim cards inserted into our old, unlocked iPhone 4s’s. And then life was better. Or at least, easier.

Doug’s parents took a cab back to the hotel while we stayed for another hour or so to shop on Princess St. Then, after failing in our endeavor to locate a bus to the hotel, we hailed a taxi and enjoyed an encore dinner at The Bridge Inn.

But just before leaving Edinburgh that night, as we made our way to the taxi stand, we caught a few final glimpses of the castle in the setting sun. Perfection.

Amazing right?! Taken by me, on my iPhone 6…crazy!

Up Next
Crichton Castle, St. Andrews Links and Dunnottar Castle