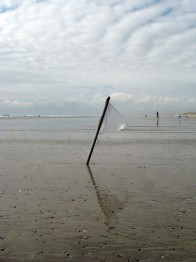 Long gone are the days when people simply gave up ice cream or meat for Lent. Modern observers of the season abstain with far more creativity than ever before, giving up such things as Facebook, television, wearing jewelry, caffeine and Sudoku. This year, I find myself part of that trend – though I gave up something far less tangible. Some may consider it weak or a cop-out to give up something so difficult to measure, but if nothing else, giving up my “rights” is changing the way I think.

In the spirit of full disclosure, I feel compelled to admit that practicing my typical Lent abstention – relinquishing my daily (and I do mean daily) intake of chocolate – held far less appeal this winter as I adjusted to a gluten-free diet. One more dietary restriction seemed almost unbearable. Contrast that with the cross of Christ, and um…yeah…you could call me a wimp, shallow, selfish. And I wouldn’t argue with you.

At the same time, giving up my “rights” hasn’t been quite as easy as you may think…especially if I am honest about my progress. One reason I didn’t want to commit to such a fuzzy agreement – aside from feeling like a hack – is the difficulty in measuring success. Give up chocolate, coffee, even Facebook or Sudoku, and if you try hard enough, victory is yours. Even a mediocre will can power you through 46 days of self-denial. But forego your rights and you’re doomed to fail.

What do I mean by giving up my “rights”? To some of you, what I am about to say is going to sound ridiculous…absurd…wrong even. After all, rights are part of the fabric of America, where each person is “endowed by their Creator with certain unalienable Rights, that among these are Life, Liberty and the pursuit of Happiness.” Thank you, Thomas Jefferson. Those are just a few of a long list of rights we claim to protect in this, our land of liberty. America has been a champion for civil rights, human rights, women’s rights, the right to vote, the right to privacy, the right to speak and think freely. And I daresay the list is growing. Though we do not all agree as to which rights should be afforded government protection and which should not – such as the rights of the unborn or the right to insurance coverage for contraception – most of us believe passionately that people possess inherent rights no other human being or government should violate.

It would seem, then, that championing the rights of people, especially cultural underdogs, cannot have a downside. I mean, seriously, how can you go wrong with that? By stepping off the narrow path of unalienable rights, into the murky abyss of entitlement. That’s how. Yes, I said it: Entitlement! But don’t leave yet – I promise, NO politics in this post! Ugly political buzzword that it is, entitlement has insidiously snaked its way into human hearts since the dawn of creation. “Hey there, Eve. Sure you can eat that apple. If God can have it, why can’t you? Go on, take a bite. Why shouldn’t you have what you want?”

Perhaps the better question is: why should she get what she wants? What is her claim? She has none. She can’t even use the trusty old territorial defense, because she wasn’t even there first! Sad as it is, we are no different than Eve. Do any of these statements sound familiar: “How dare he cut me off in the middle of an intersection!”  “Who does she think she is, leaving me to clean up this mess?” “What? No apology? I at least deserve an apology!” “When do I get a day off?” “Why is his life so much better than mine?” You may not say it out loud, but I bet those thoughts – or something like them — are rolling around inside your mind, bouncing off the inside of your skull like belligerent toddlers, demanding compensation. That’s often what it’s like in my head.

But what is my claim? What are the grounds for my appeal? You see, we’ve become so bent on getting what we deserve that we’ve lost sight of the fact that we actually deserve nothing. There is no cosmological agreement, penned in stardust or stamped on the sky, even suggesting that we have a right to anything – life, food, shelter, love. Nothing. Everything good, anything good, that we have is a gift – whether the Garden of Eden or the crocuses in my flower bed. So then what right do I have to uninterrupted sleep, a painless childhood, a master bathroom, freedom from back spasms, lower gas prices, the guy in front of me at least matching the speed limit, an apology or to be understood? Not one.

I can hear you now. “But wait, what about those unalienable rights endowed by our Creator?” Let me clarify. Life is a gift from God, as I see it, and for that reason I believe that one’s “right” to life goes only so far in that no other human being can lay claim to it, interfere with its freedom or its pursuit (not necessarily its attainment) of happiness. But to out and out insist I have a right, of my own accord, to my life is absurd in light of the fact that I did nothing to gain it, and ultimately can do nothing to retain it. My life, in the truest sense, does not belong to me.

So here I am. And there you are. Two happy accidents some might say. Or, in my opinion, two very unique works of art, created by the Artist Himself. If it is the former, then we have no claim to anything. No common reference point for demanding anything at all. Just two selves, imposing selfish demands. If it is the latter, then our only claim is that we belong to the One who made us. Anything He deigns to give us – or not give us – is entirely up to Him. Period. Whether we like it or not, that is reality.

Wow, a thousand words just to establish some sort of reality as the basis of my Lenten whims. And I haven’t even gotten to my point yet! Ah well. If anything in the piece interests you at all, whether you agree or disagree or have no idea what I am talking about, I humbly ask that you consider how often you demand your rights. What are those sneaky little entitlements that have found their way into your mind and heart…robbing you of contentment and joy? Then, perhaps another day, I can entertain you with tales of the challenges and lessons I’ve experienced upon grudgingly giving up a few rights I cannot even claim in memory of the One who surrendered every right due His name.

11 thoughts on “Giving Up My Rights”