By now you all know how our family loves Disney World. I actually think, that if given the chance, I would visit every year. My dream vacation, aside from this cross country road trip, is to spend 2 (maybe 3) full weeks in Disney, staying inside the park and seeing everything at a reasonable, enjoyable pace. Disney always feels like a genuine escape; a place one can forget everything beyond the borders and just have fun.

Over the years, I have heard much commentary on the difference between Disney World and Disneyland. Mostly I have been told that the Land is nothing comparing the World and that if you are going to go, you should just go to Disney World. After my first visit to the Land, I see the reasoning behind this sentiment. Disneyland is what I would call “Disney Light” – same great taste but a little less filling. Yet for some families, this may not be a bad thing.

First, as most people know, Disneyland is much smaller than Disney World. Disney World has four major theme parks – Magic Kingdom, Epcot, Animal Kingdom and Hollywood Studios – and two water parks – Blizzard Beach and Typhoon Lagoon. While Disneyland consists of a mere two parks: Disneyland (equivalent to the Magic Kingdom) and California Adventure, a sort of mish-mash of the World’s other three parks.

A smaller park disappoints in some ways, as there are fewer rides, shows and dining options. Also, because of its sheer magnitude, Disney World possesses an intangible power not present at Disneyland. In Orlando, one feels overcome by and absorbed into a completely new world, a place apart from time and free from the trials. Disneyland does not have this effect.

The most shocking moment for us was when we entered Disneyland and looked up Main Street toward Sleeping Beauty’s Castle. At first I thought the parks centerpiece was missing! Sleeping Beauty’s castle is a mere dwarf compared to Cinderella’s Castle in Orlando. 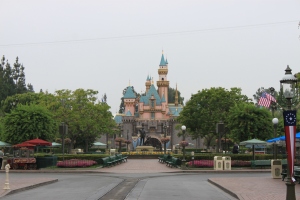 Note its height in relation to the trees and Walt Disney's statue!

Doug and Jacquelyn also mentioned that some of the rides, particularly the roller coasters, were disappointing, slow and less elaborate. Other rides, however, like Pirates and Small World were longer and more detailed. Though some people, like my step dad, would not consider extra time on It’s a Small World a good thing!

A smaller park does have many advantages, though; and families looking for a “Disney Light” experience may find the Land a little more digestible. While there are still many attractions in Anaheim – too many to see in one day – they all reside closely together. This increases the sense of crowding (which I hate) but also decreases the amount of walking (yay!). A more compact park also means that you can see more in less time, particularly if you approach the park strategically. Another bonus: Disneyland and California Adventure sit directly across the street from one other, making park hopping easy and efficient.

The smaller more condensed layout extends to the area surrounding the park as well. At the Land there are only three hotels within the resort and they are mega-expensive. No value resorts here. But a slew of independent hotels surround the park for relatively reasonable rates. We stayed at a Sheraton outside the park (using mile points) and we were only a 10-15 minute walk from the park entry. All hotels appear to offer a shuttle service as well. For $13/day for the four of us, we used the shuttle service, which ran every 15-20 minutes. Those of you who have been to the World know that whether you are inside or outside that park, travel time is always a minimum of 20 minutes and can be more than 30 minutes if transferring from one mode of transportation to another. (The only exception is when visiting the theme park your hotel is based in; for example if you are staying at a Magic Kingdom resort you have a short ride or walk to that park, but visiting other parks typically takes much longer.)

So if you are interested in Disney but don’t think that you or your children can handle the magnitude of the World, Disneyland may be a good option for you. I think you can see all of both parks in two days at a fast pace, three days at a moderate pace and 4 days at a more leisurely pace.

The shows we saw at the Land were equal in quality to those in the World, and the smaller park enabled closer viewing. For the most part, this made the viewing much better. However, at the Land, “prime viewing” for night time shows must be bought or fast passed. For example, at Fantasmic one must purchase a pricey dessert tray ($59/$49 person) to gain entry to the closest sidewalks. For World of Color, a person must either eat dinner at an expensive restaurant ($40/person), purchase a picnic dinner ($15/person) or wait in a line (up to 90 minutes) for “fast pass” reserved seating. Unfortunately, unless one resigns to watch from the side or back, (which distorts the images projected on the water), viewing for World of Color is entirely reserved. The Land even has reserved seating for parades!!! I think this method is probably the product of limited space combined with L.A. mentality – out here, people seem accustomed to paying for what they want.

I personally missed the freedom of open space and the “first come, first served” mentality at Disney World. There, even the cheapest among us can stake out prime viewing early in the evening. Don’t get me wrong! We have paid for our share of dinners at Epcot’s Rose ‘n Crown, but that was because we chose a nice, leisurely dinner in front of the fireworks; not because we had no other options. Perhaps, if we had another day to spend in Anaheim, we would have waited for the fast passes or bought the $15 dinner; but with such limited time, we opted for the 10:30 showing of Fantasmic. At this time of night, the crowds were thinner and we were ready for a rest. We did not have reserved seating but we were just behind them with a perfect view. Strangely enough, this was our first Fantasmic experience and we loved it!

The only other difference that stands out to me is the general lack of Disney camaraderie at the Land. At the World one has a sense of being part of something grand, even a sense of community. Don’t expect to do very much pin trading in Anaheim and “cast members” are not nearly as cheerful, magical or “Mickey-fied” as those at Disney World. (Though, our waitress was wonderful!) Basically, the Land has more of a general amusement park feel. As Doug put it, “Disneyland is not quite Six Flags, but it’s definitely not Disney World!”

So here’s my summary of recommendations:

2)If you are looking for a “Disney Light” experience, go! This is the perfect place to get your feet wet.

3)If you want a genuine Disney experience, the whole shebang, go to Orlando. It’s the real thing, baby!

2 thoughts on “Disneyland vs. Disney World”