How do you like your home? Is it big enough? Clean enough? Are you like me, always redecorating, improving and even remodeling? We have a modest 1600 sq. foot home (this includes our finished basement) which we bought as a “fixer-upper”. We (that mostly means Doug) have remodeled nearly the entire house. What a transformation! Even so, our bedroom is about 12 x 12’ and the bathrooms (we don’t have a master bath) are smaller than most walk-in closets. Living in Connecticut, and especially in Simsbury, surrounded by bigger and “better” homes, I am easily tempted to want more – a bigger kitchen, a garage, a mud-room, a guest room.

On Wednesday, we visited Mesa Verde National Park in Colorado. The ancestral Pueblo people, known as the cliff dwellers, lived here for about 700 years before they left during the late 1200’s. Many of their homes are still standing today. We were able walk down a short path through the woods to the best preserved cliff dwellings in the park, Spruce Tree House. 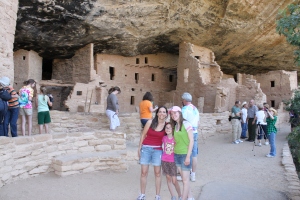 The little community housing development, made of sand colored stone, clay and wood, looks almost like a miniature apartment building built into a wide, shallow, cliff-side cave. At the outermost part of the cave sit the round, underground rooms called “Kivas” – fire ready, ventilated rooms used mostly for spiritual rituals. The Kivas, situated at the entrance of the caves, have roofs so that the area above serves as a common area or courtyard. They entered the underground room by climbing down a ladder inserted in a small hole in the courtyard floor. We were actually able to climb down into one of these Kivas like the Pueblo people did! The room was very small and very dark – though a fire may have cozied things up a bit.

The front and middle rooms were built a little further back into the cliff side, just after the common area. These rooms, built for 1-2 people, measure about 6 x 8’ and were intended for sleeping and, during bad weather, served as work areas. Spaces at the far back of the caves were used for storage, refuse and, on occasion, as burial sites.

While we were visiting the cliff dwellings and touring the park museum, Christina said, “I’m so glad we live now!” Me too! How glad I am for my 1600 sq. foot palace!

We probably spent about 1 ½ hrs at Mesa Verde. But we spent nearly 2 hours sitting in construction traffic. If we could add up all the time we’ve spent in traffic on this trip, we might gain back half a day! Every national park we visited is under heavy road construction and so are many towns – it is summer after all. But how they handle traffic during construction out here in the mid-west is enough to drive a busy New Englander crazy! They don’t divert traffic or alternate lanes every 5, 10 or 15 minutes. Nope. They simply stop traffic and make you wait…and wait….and wait. At one park they let traffic through once per hour; and trust me, in the parks there is nowhere else to go and no other way to get there! On the streets of Colorado, we waited for 30 minutes to be let through a paving site which had ample space for two alternate lanes of traffic. People out here must be significantly more laid back than we are; Doug and I were so frustrated, I thought we might spontaneously combust!

We ate an early dinner at a roof-top restaurant in Durango. There we met a friendly Colorado native who works as a river guide. When Doug asked him about the traffic and construction, his advice was to “always have something you like to drink in the car with you.” I shared my theory that people out here must more laid back than us New Englanders, because this kind of system would never fly at home. He earnestly agreed, graciously pointing out that the difference between Coloradoans and New Englanders is “pretty obvious”. I loved his honest, judgment free observation. As I considered a more carefree life I kept thinking “but there are places to go and people to see!” I guess 3 weeks on the road hasn’t take the New Englander out of me yet.