Thursday we drove from Idaho to Lake Tahoe. The drive through what they call the “high desert” in Nevada was interesting. The drive was smooth, fast and easy thought the scenery was a little boring. We arrived at Lake Tahoe, which is a lake that rests – like a bowl of soup – inside a ring of mountains on the California/Nevada border, just in time to see the sunset. What a beautiful view!

We had dinner at Chili’s and found a Trader Joes’s which made us all feel a little closer to home even though we are thousands of miles away!

On Friday we drove down from the mountains to San Francisco. We decided to go into the city to do some shopping for the evening. As we were headed in, I asked Doug if we could check if the Giants were playing at home this weekend. I said it could be my anniversary present (which is today 6/26) but he just rolled his eyes. Really? What guy out there wouldn’t be thrilled that his wife asked to see a ballgame for their anniversary?!

Anyway, part of his reluctance was because we had checked the Red Sox schedule months and months ago and they weren’t going to be in any of the towns we were in on our trip. He didn’t want to pay to see just anyone. As we drove by AT&T Park, we saw all the fans lining the streets and Jacquelyn pointed out how many of them were dressed in Red Sox gear. I didn’t think much of that; Red Sox fans are everywhere. But there were more and more Boston caps, Ortiz jerseys, Red Sox sweatshirts. Finally we asked someone and sure enough, due to some scheduling changes with the LA Dodgers, the Red Sox were playing the Giants, right here in San Francisco!!!

Some would call that destiny – it felt like it to me! I even had on my hot pink Red Sox cap and Doug was wearing the team sweatshirt by brother gave him. Our plans changed quickly – how can you fight destinyJ 🙂 – and we bought four tickets on the top level just behind home plate. You don’t want to know what we paid…or rather I don’t want to tell you! But it was worth it. Our view was absolutely amazing. As Christina put it, “I like this because it’s like an aerial view.” The ballpark sits right on the edge of San Francisco Bay and from our seats we could see the water, sail boats and sky just over the bleachers and right field. 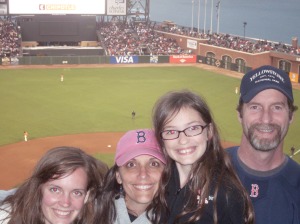 I love baseball! I love baseball games! One of my favorite moments in life is walking from the dark tunnels of the concourse up the ramp or stairs and out onto the wide open, sunlit or lamp lit, green field. At that moment, a feeling something like freedom and expectant hope washes over me. There is nothing else quite like it. Even after a night of rooting for our team on someone else’s soil, watching a star player leave the game hurt, leaving 13 men on base and losing the game while down one, with two outs and the bases loaded (for the 3rd time) could dampen this girl’s spirits. Nearly 12 hours later and I am still riding the high. Doug said it best when he told the girls, “We can go home now. Mom’s vacation is complete.”

Well, we aren’t quite intending to come home yet, but I am feeling pretty great!